Research your Acura with our VIN decoder

Enter your Acura's 17-digit VIN above to decode your VIN. We will show your vehicle specification and full vehicle history report, which includes thefts, detailed vehicle records, accidents, titles, and more. This information is compiled by VinFreeCheck.com from multiple sources including but not limited to DMVs, police records, insurance database and made public as a free, informational resource. 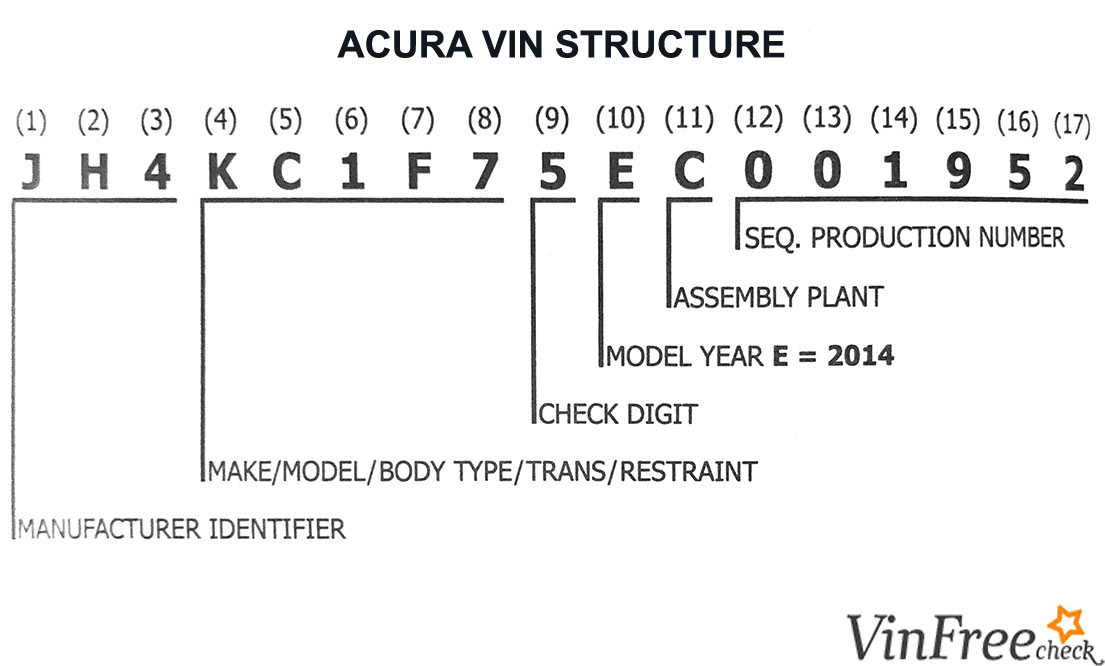 Acura VIN numbers are broken down to 9 sections:

We also have a list of Acura's squish VIN information available in the table below. A squish vin is basically the first 11 characters of the full VIN Number. However, it does not contain the 9th character, which is a check digit to check the validity of a VIN number. With squish VIN, you can manually decode your Acura's VIN with just pen and paper. To learn more check out, What is a VIN Number

Acura is the American luxury vehicle brand of Japanese carmaker Honda. The marque was launched in the U.S. and Canada on 27 March 1986, marketing performance, luxury, elite vehicles. It was launched in Hong Kong in 1991, Mexico in 2004, China in 2006, Russia in 2014, and Kuwait in 2015, and is likewise sold in Ukraine. Honda's scheduled introduction of Acura to the Japanese Domestic Market (J.D.M.) in 2008 was delayed because of economic reasons and later withheld due to the 2008 financial crisis.

The name of the brand is based on the morpheme "Acu" (Acu), and it originates from the Latin language and common to numerous languages. Its meaning can be translated as precision, carefulness, and unwavering quality. The new word Acura, which was taken from this morpheme, passes on the essential standard of the brand. The official logo of Acura, which resembles the letter "A," in truth has a lot of further significance. It denotes the caliper, a tool for precise measurement. This emblem infers that each Acura vehicle is made with accuracy and technological perfection.

As per the tests, made by the United States Insurance Institute for Highway Safety (I.I.S.H.), Acura vehicles are one of the safest vehicles on the market. The influential institution tested many safety features, including the automatic braking system at speeds of 20 to 40 km/h. All cars, manufactured by the Japanese carmaker, in particular, Acura RDX crossovers and Acura MDX, as well as Acura ILX Acura R.L.X. Car got the most astounding safety rating.