Research your Audi with our VIN decoder

Enter your Audi's 17-digit VIN above to decode your VIN. We will show your vehicle specification and full vehicle history report, which includes thefts, detailed vehicle records, accidents, titles, and more. This information is compiled by VinFreeCheck.com from multiple sources including but not limited to DMVs, police records, insurance database and made public as a free, informational resource. 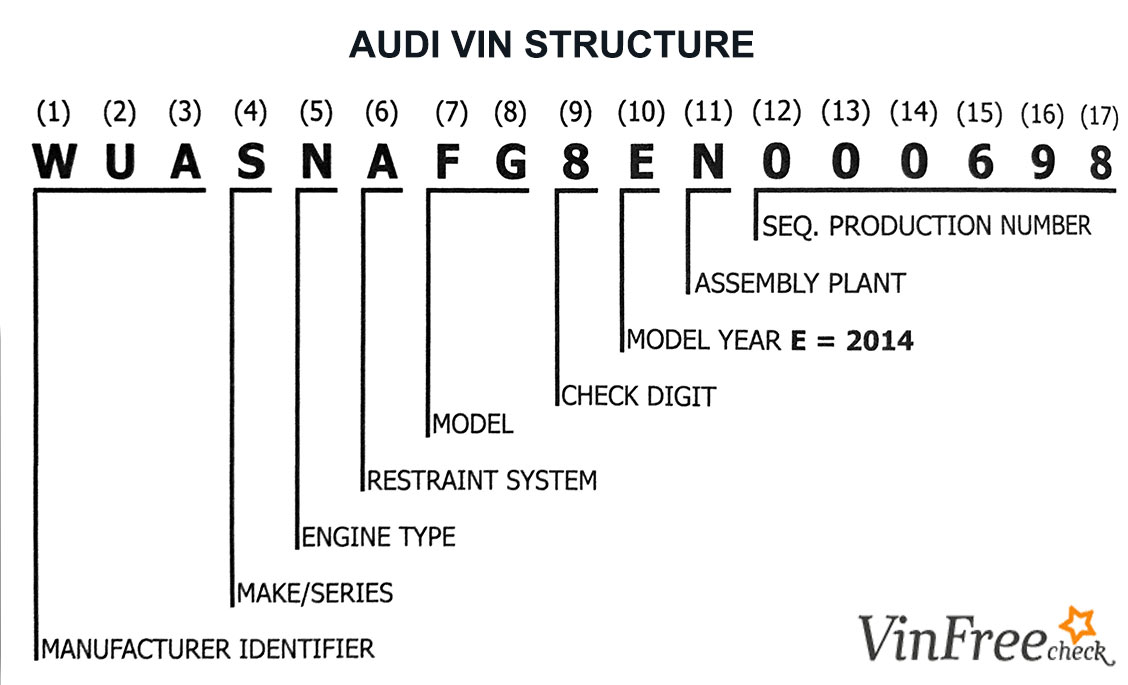 Audi VIN numbers are broken down to 9 sections:

We also have a list of Audi's squish VIN information available in the table below. A squish vin is basically the first 11 characters of the full VIN Number. However, it does not contain the 9th character, which is a check digit to check the validity of a VIN number. With squish VIN, you can manually decode your Audi's VIN with just pen and paper. To learn more check out, What is a VIN Number

Audi car manufacturing company is one of the top-rated luxury automobile makers in the world. However, the origin of this German brand is elaborate and colorful, without a doubt. There is always a story behind the name of every car manufacturer. Sometimes, it could be the name of the family who founded the company (Bentley, for instance), sometimes it is an abbreviation for an expression people don't seem to recall. The story behind Audi, in any case, is a little bit interesting. It was taken from the name of the founder, August Horch. Horch in Latin is Audi, which means 'to listen'. And thus, in April 1910 Audi Automobile was officially launched.

Audi as we presently know it launched their first ever car in 1910 and that was the Audi Type A Sport Phaeton. Its successor, the Type B Sport Phaeton was also launched later that year. Both were a success, especially in sporting events. Also, the Audi logo was brought into life after a merger of four car companies. Engineer Jørgen Rasmussen obtained dominant shares in Audi in 1928. Soon, the automakers merged with Wanderer, Rasmussen's DKW, and Horch Motors to form the Auto Union in 1932. The merger prompted the creation of the four interlocking rings as the official logo.

In recent years, Audi has enormously expanded its model lineup, offering traditional saloons as well as sports coupes. Audi is globally known as a notoriety brand, keeping pace with its German counterparts, BMW and Mercedes. The company has continued to create innovations such as aluminum bodies, diesel technology, the "Multitronic" Continuously Variable Transmission (CVT), and distinctive SUVs.