Research your BMW with our VIN decoder

Enter your BMW's 17-digit VIN above to decode your VIN. We will show your vehicle specification and full vehicle history report, which includes thefts, detailed vehicle records, accidents, titles, and more. This information is compiled by VinFreeCheck.com from multiple sources including but not limited to DMVs, police records, insurance database and made public as a free, informational resource. 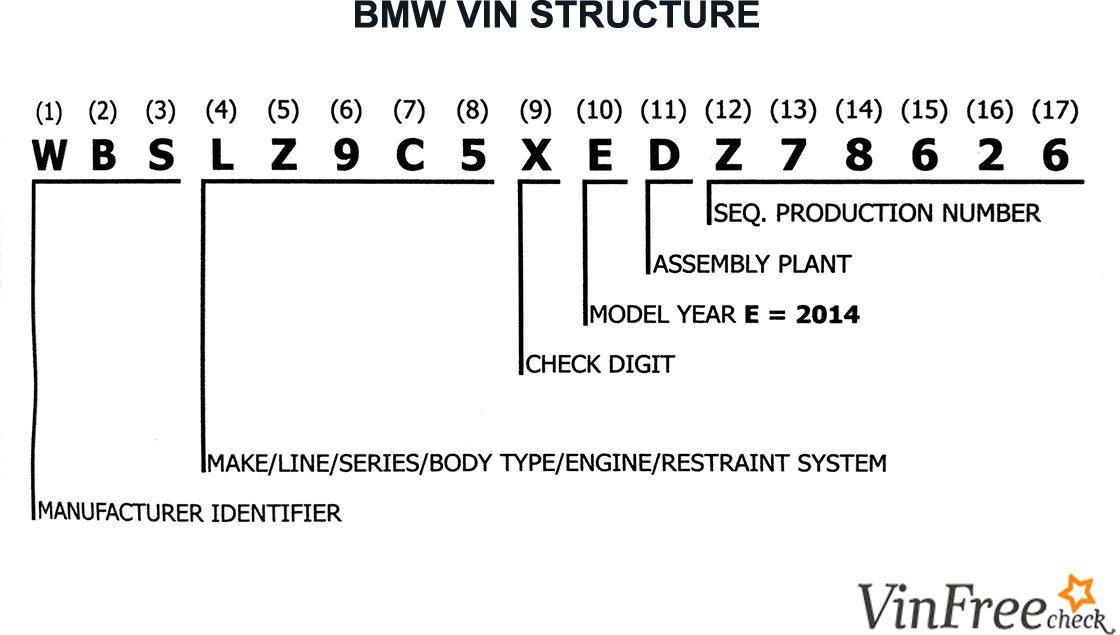 BMW VIN numbers are broken down to 9 sections:

We also have a list of BMW's squish VIN information available in the table below. A squish vin is basically the first 11 characters of the full VIN Number. However, it does not contain the 9th character, which is a check digit to check the validity of a VIN number. With squish VIN, you can manually decode your BMW's VIN with just pen and paper. To learn more check out, What is a VIN Number

BMW is a German international company which manufactures automobiles and motorcycles. The car-making company was established in 1916 as a maker of aircraft engines, which was manufactured from 1917 until 1918 and again from 1933 to 1945. Cars are marketed under the brands BMW, Rolls-Royce, and Mini and motorcycles are marketed under the brand BMW Motorrad. In 2015, BMW was the world's 12th largest automobile makers, with 2,279,503 vehicles made. BMW is headquartered in Munich and manufactures vehicles in Germany, China, Brazil, South Africa, India, the United Kingdom, and the United States.

Since the company was launched, they have made a wide range of models of vehicles. The first car they produced was known as the 'Dixi.' When they first moved into the car-making business, they purchased Automobilwerk Eisenach in 1928. This gave them the rights to make the Dixi car. When the vehicles were first made, they're badged as BMW Dixi. IN 1929, the Dixi name was dropped from the motor vehicle, and an updated model was introduced. This was known as the BMW 3/15 DA-2 and went public in 1929.

While some people believe the BMW logo denotes the spinning propeller of an airplane, alluding to the company's history as plane engine makers, the structure is really a tribute to its roots in Bavaria, Germany. The famous white and blue design mirrors the blue and white pattern on the flag of Bavaria, where the company was launched.