Research your Buick with our VIN decoder

Enter your Buick's 17-digit VIN above to decode your VIN. We will show your vehicle specification and full vehicle history report, which includes thefts, detailed vehicle records, accidents, titles, and more. This information is compiled by VinFreeCheck.com from multiple sources including but not limited to DMVs, police records, insurance database and made public as a free, informational resource. 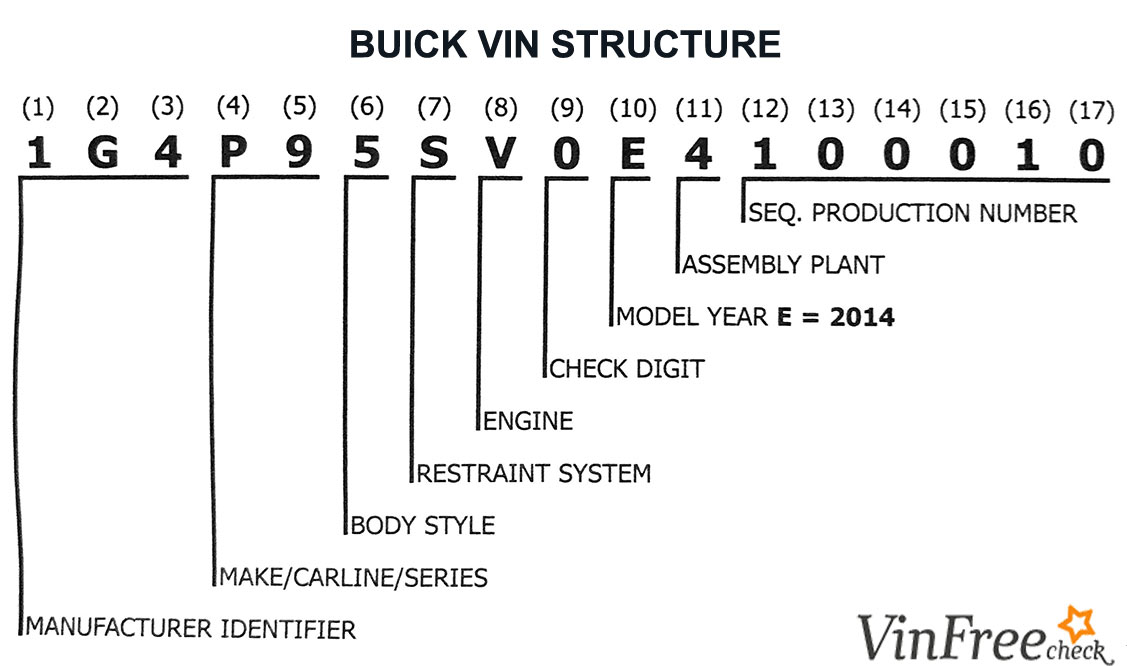 Buick VIN numbers are broken down to 9 sections:

We also have a list of Buick's squish VIN information available in the table below. A squish vin is basically the first 11 characters of the full VIN Number. However, it does not contain the 9th character, which is a check digit to check the validity of a VIN number. With squish VIN, you can manually decode your Buick's VIN with just pen and paper. To learn more check out, What is a VIN Number

Buick is one of the earliest auto manufacturers in the United States. It was a plumbing company back in the olden days before it becomes the car luxury brand we all know today. The company was founded in the year 1899 as Buick Auto-Vim and Power Company, but in 1903, it was renamed the Buick. It is headquartered in Detroit, Michigan. Soon after, the founder, David Dunbar Buick, stopped all his plumbing-related business and focus solely on his passion for auto manufacturing.

Buick's first car, Model B which had a two-cylinder engine with an advanced-for-its-time overhead-valve cylinder head design was unveiled in 1904. In 1907, Buick unveiled its first four-cylinder production car, the Model D. The following year, William C. Durant acquired Buick Motor Company to form General Motors. By 1914, all Buicks were built with six-cylinder engines and purchased primarily by upper-class professionals. In 1984, Buick's expansive model lineup skyrocketed their sales, propelling Buick to be one of the biggest car brands in the United States. By the end of 1920's, the Great Depression plummeted Buick market share, but Buick was managed to ride out the Depression with its vast cash reserves.

Today, Buick is sold globally, including the United States of America but not limited to China, Canada, Israel, and Mexico. In fact, China sells more Buick cars than the United States and makes up to 35% of Buick global sales. Luxury and class are still common themes, but Buick is changing its car line up to specialize in sedans and crossover SUVs to target the younger audience.