Research your Chrysler with our VIN decoder

Enter your Chrysler's 17-digit VIN above to decode your VIN. We will show your vehicle specification and full vehicle history report, which includes thefts, detailed vehicle records, accidents, titles, and more. This information is compiled by VinFreeCheck.com from multiple sources including but not limited to DMVs, police records, insurance database and made public as a free, informational resource. 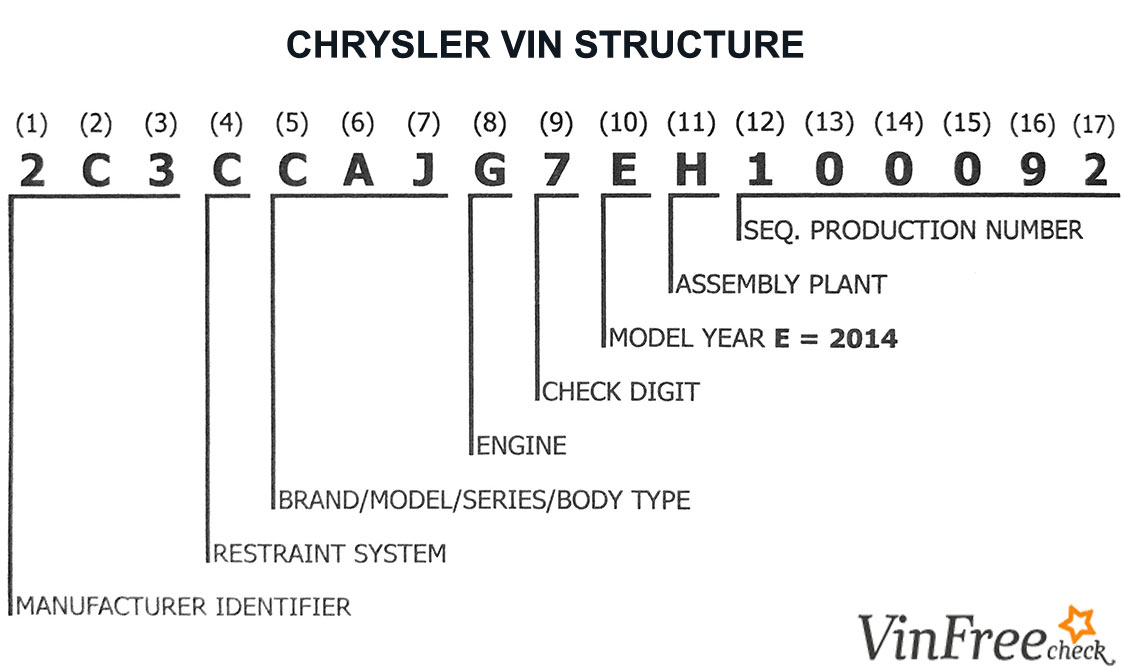 Chrysler VIN numbers are broken down to 9 sections:

We also have a list of Chrysler's squish VIN information available in the table below. A squish vin is basically the first 11 characters of the full VIN Number. However, it does not contain the 9th character, which is a check digit to check the validity of a VIN number. With squish VIN, you can manually decode your Chrysler's VIN with just pen and paper. To learn more check out, What is a VIN Number

Chrysler officially known as FCA US LLC, and colloquially Fiat Chrysler Automobiles) is one of the "Big Three" automobile manufacturers in the United States, headquartered in Auburn Hills, Michigan. The original Chrysler Corporation was founded in 1925 by Walter Chrysler from the remains of the Maxwell Motor Company. In 1998, it was acquired by Daimler-Benz, and the holding company was renamed DaimlerChrysler.

After Daimler divested Chrysler in 2007, the company existed as Chrysler LLC (2007-2009) and Chrysler Group LLC (2009-2014) before merging in 2014 with Italian holding company Fiat S.p.A. and becoming a subsidiary of its successor Fiat Chrysler Automobiles. In addition to the Chrysler brand, FCA sells vehicles worldwide under the Dodge, Jeep, and Ram nameplates. Furthermore, the subsidiary includes Mopar, its automotive parts and accessories division, and SRT, its performance automobile division. Like any company in American history with nearly a century of longevity, Chrysler has made a mark on a long automotive legacy.

Chrysler's primary goal is to make sure customers are satisfied with the performance of their vehicles. Chrysler provides an ownership experience as unique as your Chrysler vehicle. And did you know that FCA also has its own parts and accessories company? Mopar is FCA's parts and accessories department which has parts that are specifically designed for your Chrysler vehicle. Chrysler also offers many other perks such as the AutoAbility Program. It was put in place to help customers who are physically challenged modify their car at an affordable cost. Chrysler always puts its customers first, so you will be proud to be a Chrysler owner!