Research your Dodge with our VIN decoder

Enter your Dodge's 17-digit VIN above to decode your VIN. We will show your vehicle specification and full vehicle history report, which includes thefts, detailed vehicle records, accidents, titles, and more. This information is compiled by VinFreeCheck.com from multiple sources including but not limited to DMVs, police records, insurance database and made public as a free, informational resource. 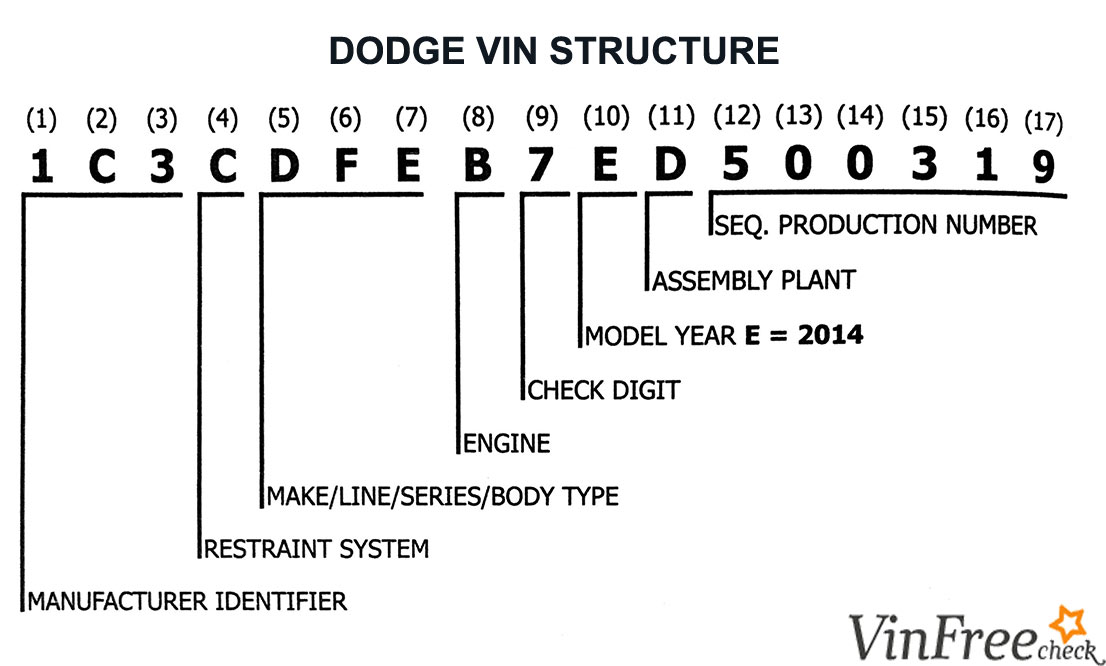 Dodge VIN numbers are broken down to 9 sections:

We also have a list of Dodge's squish VIN information available in the table below. A squish vin is basically the first 11 characters of the full VIN Number. However, it does not contain the 9th character, which is a check digit to check the validity of a VIN number. With squish VIN, you can manually decode your Dodge's VIN with just pen and paper. To learn more check out, What is a VIN Number

Dodge is a huge name in the domain of performance cars which was formerly called Fiat Chrysler Group. The company carries its legacy since its inception in the year 1900. In the beginning, Dodge just supplied parts and pre-built vehicle assemblies to the local automobile producers in the Detroit state. In the year 1914, the company started building its own vehicles which served as a landmark for Dodge. The founding members of the firm John and Horace both took their last breath in the year 1920. After this, the company was sold to Dillon, Read and Co. in 1925 by their Families. Chrysler acquired the company in 1928. The most prominent vehicles produced post-acquisition were Dodge D11, Dodge Airflow Texaco, Dodge custom 4 door sedan, and more.

Dodge dealt with the manufacturing of trucks and full-size passenger cars in the 1970s. On the other hand, Dodge was also involved in manufacturing some pretty impressive small cars like the 1963 - 76 Dart and also some regular size cars named as Coronet and Charger in the years 1962 - 79. The scarcity of oil situations of 1973 had a bad effect on the automotive market of the US which led Chrysler to make some changes in their business. They developed the K platform and produced some vehicles based on it which were responsible for the restoring of the business of Chrysler in the 1980s. The K platform gave birth to one of the great vehicles developed named Dodge Caravan. By the end of the 20th century and at the inception of the 21st century, Dodge was owned by many different firms like Cerberus Capital Management, Daimler Benz AG (1998 - 2007), and more. Fiat acquired Chrysler in 2009 after chapter 11 bankruptcy. After its full acquisition by Fiat, the company was named as Fiat Chrysler Automobiles in 2014. Post this, the company solely focussed on making performance vehicles and launched Alpha Romeo in 2014. Last year Dodge stopped the construction of Dodge Grand Caravan and Dodge Avenger.

Dodge has a huge market in countries like Argentina, Brazil, Europe, Canada, Mexica and also in the Asian continent. Apart from producing performance cars they also deal with pickup trucks, SUVs, and Vans. Dodge as an automotive manufacturer has grown up to a great level in the last few years.