Research your Ferrari with our VIN decoder

Enter your Ferrari's 17-digit VIN above to decode your VIN. We will show your vehicle specification and full vehicle history report, which includes thefts, detailed vehicle records, accidents, titles, and more. This information is compiled by VinFreeCheck.com from multiple sources including but not limited to DMVs, police records, insurance database and made public as a free, informational resource. 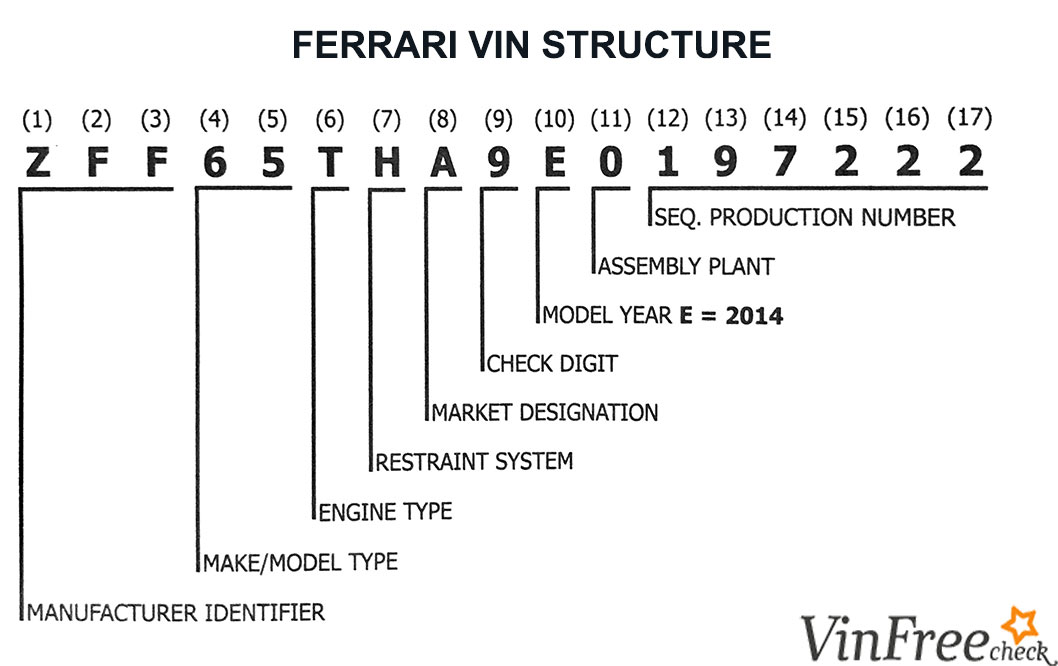 Ferrari VIN numbers are broken down to 9 sections:

We also have a list of Ferrari's squish VIN information available in the table below. A squish vin is basically the first 11 characters of the full VIN Number. However, it does not contain the 9th character, which is a check digit to check the validity of a VIN number. With squish VIN, you can manually decode your Ferrari's VIN with just pen and paper. To learn more check out, What is a VIN Number

The shiny Red Ferrari has graced the silver screen and has spell bounded many audiences and car lovers since the day it was launched. Ferrari is one of the costliest brands of car manufacturers with the selling price of its 250 GTO being $70 million. The brand history of this iconic car manufacturer goes back in 1939 when it was founded by Enzo Ferrari. Later in 1969, 50% of its shares were acquired by FIAT S.p.A. Later in 2014 FIAT from Ferrari s.p.a which led to the development of Ferrari N.V.

Ferrari has notably participated in car races and has been a major producer of sports car models. Further, the cars produced by Ferrari have been a symbol of luxury and wealth. This company also works closely with its clients so that they can get their vehicles customised to their likes. Thus, you can have a unique piece of art designed almost from scratch. The first car produced by Ferrari was the 166 Inter in 1949. Before this Ferrari was into production of motorsport vehicle only. Its Scuderia Ferrari car manufacturing division produces luxury sports cars for Formula 1 and other races as well.

Ferrari has always been knee-deep into crafting unique car models. In 1984 it took this endeavor further and launched its first supercar line 288 GTO. This was later accompanied by hyped car models such as Enzo Ferrari and Laferrari which continues to awestruck car lovers and engineers to date. Ferrari has also invested in special car projects which had state of the art automobiles to showcase the latest technology and designs. One such example is Mythos whose design elements were later adopted in car productions as well. With the help of such constant innovation and up-gradations Ferrari has established itself as an ace of luxury car markets. Also, by the end of 2018, the number of cars that this company sold in its reached a whopping 208,931 mark.