Research your FIAT with our VIN decoder

Enter your FIAT's 17-digit VIN above to decode your VIN. We will show your vehicle specification and full vehicle history report, which includes thefts, detailed vehicle records, accidents, titles, and more. This information is compiled by VinFreeCheck.com from multiple sources including but not limited to DMVs, police records, insurance database and made public as a free, informational resource. 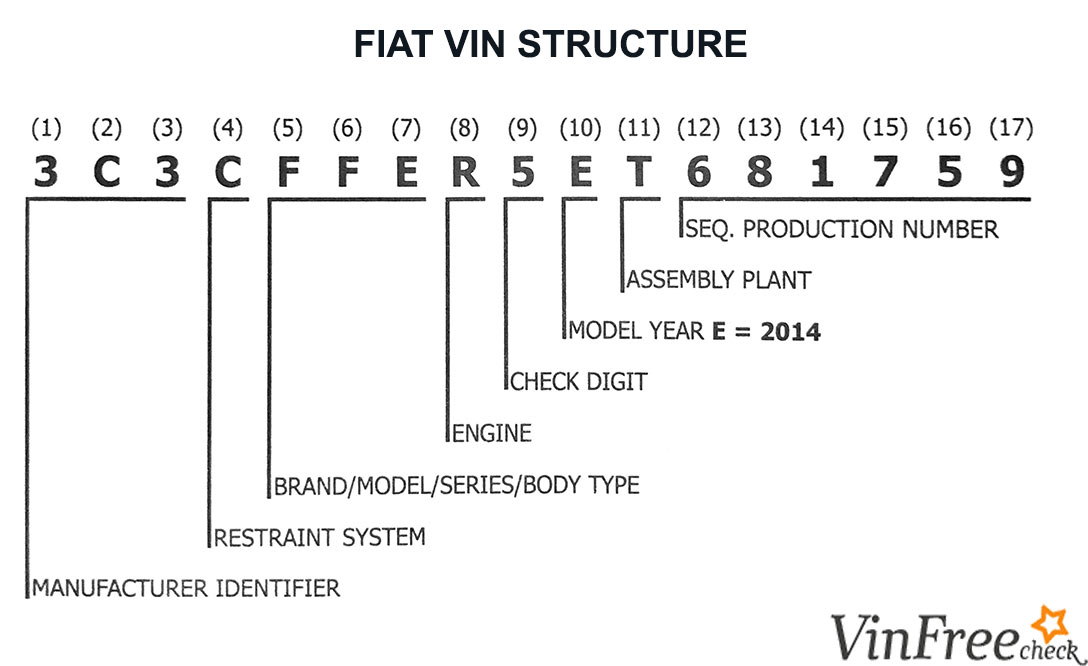 Fiat VIN numbers are broken down to 9 sections:

We also have a list of FIAT's squish VIN information available in the table below. A squish vin is basically the first 11 characters of the full VIN Number. However, it does not contain the 9th character, which is a check digit to check the validity of a VIN number. With squish VIN, you can manually decode your FIAT's VIN with just pen and paper. To learn more check out, What is a VIN Number

FIAT, a subsidiary of FCA Italy s.p.a is an Italian car manufacturing company with its automobile business spread all over the world. This company is a famous manufacturer of compact family cars and aces its worldwide market. Moreover, the cars manufactured by FIAT are known to have the lowest CO2 emission rates and have received car of the year awards in Europe nine times which is the largest number of awards received by any manufacturer to date.

FIAT started its car manufacturing plant in 1900 with 35 employees, who manufactured 24 cars as initial products. This further rose to 1,149 cars by the year 1906 with the help of its dedicated team of engineers. It also played a major role during World War 1 and 2 as it produced aircraft, engines, trucks, and ambulances for the military. FIAT has also been a producer of successful car models for motorsports as well. Their first model FIAT 124 Sport Spider was produced in 1971 which brought two successive wins in the years 1972 to 1973. The motorsport car production of FIAT continued until the 1980s when Lancia took over its manufacturing facilities and continued to produce excellent cars for the motorsports industry.

Currently, FIAT’s main consumer market is from Italy and Europe. The European market share for FIAT is assumed to be 9.1% until 2001. Apart from Italy, FIAT has its car manufacturing facilities in Brazil, Poland, Mexico, and Argentina as well. Furthermore, FIAT Automobiles also owns Lancia and Alfa Romeo which produces large family and executive cars as well. Also, it has a major presence in South America as well, which is a result of its long-time investment. FIAT is a leading seller of automobiles in Brazil and has a few car models developed specifically for its Brazilian market.

The journey of FIAT has been a turbulent one since it has faced a number of political changes in its target markets. This has further influenced its marketing and business proceedings and strategies as well. It faced a major downfall in their sales during the year 2003 and 2004 but established itself back in the market by the end of that decade. It has developed numerous models loved all over the world and is at the constant process of evolving and innovating new car models for its ever-growing market.