Research your Ford with our VIN decoder

Enter your Ford's 17-digit VIN above to decode your VIN. We will show your vehicle specification and full vehicle history report, which includes thefts, detailed vehicle records, accidents, titles, and more. This information is compiled by VinFreeCheck.com from multiple sources including but not limited to DMVs, police records, insurance database and made public as a free, informational resource. 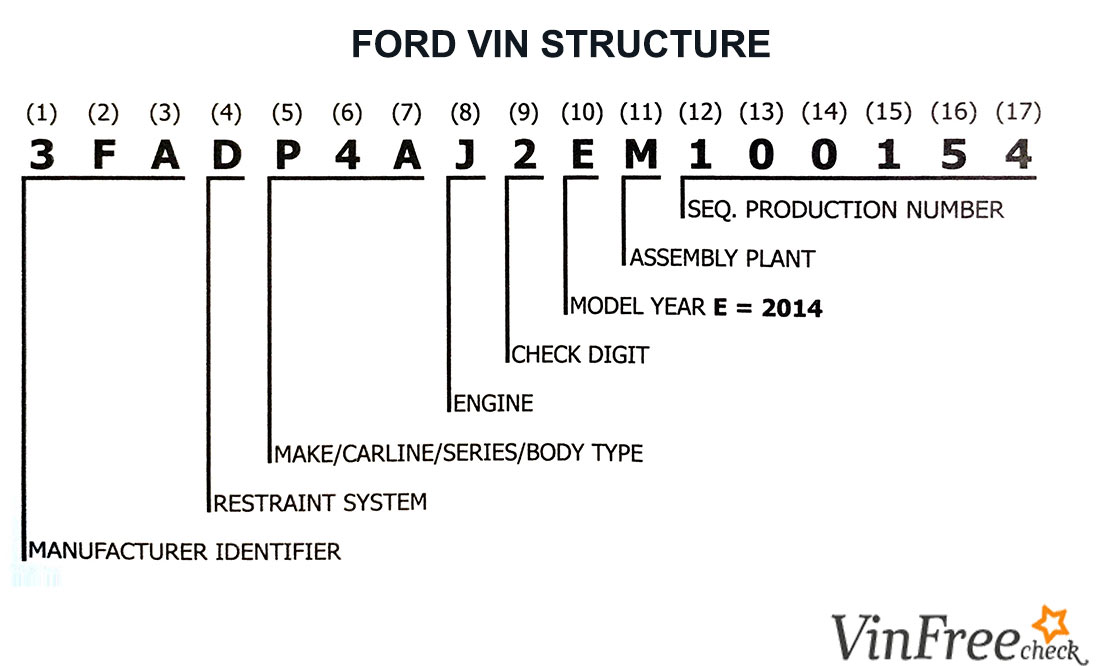 Ford VIN numbers are broken down to 9 sections:

We also have a list of Ford's squish VIN information available in the table below. A squish vin is basically the first 11 characters of the full VIN Number. However, it does not contain the 9th character, which is a check digit to check the validity of a VIN number. With squish VIN, you can manually decode your Ford's VIN with just pen and paper. To learn more check out, What is a VIN Number

In 1903, Henry Ford, together with 11 associate investors, founded the Ford Motor Company. It was not until 1919 that Ford, his son, Edsel, and his wife, Clara, took full ownership of the American automotive corporation. In January 1956 the company went public. The Dearborn-based company is well known for the production of passenger trucks, cars, and tractors.

In 1896, Henry Ford built his first car in his Detroit home, but it was not until 1903 that the Ford Company made its first commercial car. The assembly was done at the Mack Avenue plant in July that year. The Model T received a warm reception, and soon, the demand was higher than the supply.

In 1911, the company opened its first mass production line in Kansas City and an overseas branch in Manchester, England. By the early 1920s, the company was producing almost half of the USA’s automobile. And in the same period, it opened assembly plants in Asia, Canada, South Africa, and many more countries.

In the early 1990s, the company acquired Aston Martins, Jaguar, and Land Rover brands, which it later sold in 2007-2008 to Tata Motors Ltd, India. Slow sales were witnessed in the early 2000s through to 2008 when it received aid from the USA government to avoid bankruptcy. It later sold Volvo to a Chinese company in 2010 in a bid to cut production cost.

In 2018, the company announced that it would discontinue the production of all passenger cars except the Ford Focus Active and Mustang. The company will solely focus on SUVs, cross vehicles, and pickups.