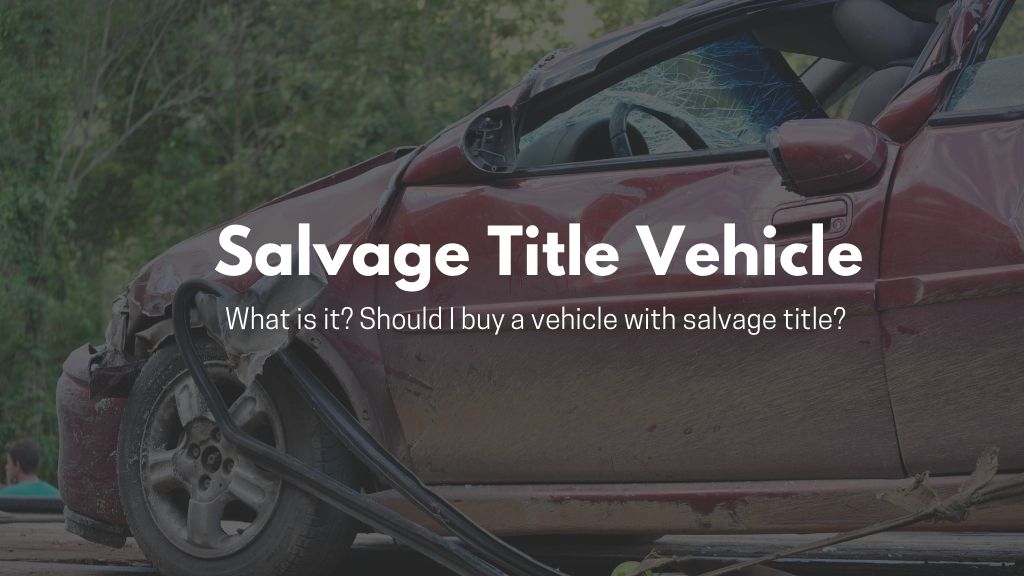 Have you ever seen that a car has been given the title as ‘salvaged’ while you were looking to purchase from used cars? If your answer is ‘Yes’ then do you know what a salvage title is and how it can impact the vehicle and its purchase decision?

Well, a salvage title is an indicator that the car has been in accidents or flooding or anything else that has damaged it significantly and thus all of its value has been diminished. A salvage title is given by a government regulator or an insurance company to inform buyers that the vehicle is impaired to a great extent. These vehicles are however repaired and made into a drivable condition so that they can be sold. Hence, salvaged vehicles are often inexpensive and are great for anyone who’s on a budget, but certainly there can be problems after.

How Does A Vehicle Get A Salvage Title?

If a vehicle gets into an accident or any mishap and the total damage caused to the vehicle exceeds a certain range, then the insurance company resolves that the vehicle cannot be repaired and thus declares it as a total loss. After this, the motor vehicle company issues a certificate that titles the car as ‘junk’ or ‘salvage’ which means that these kind of vehicles cannot be driven, registered or sold in the current condition it’s in.

Once the certificate is issued, the insurance company sends the car to a parts dismantler or a repair facility. If the car gets repaired, it has to pass a basic safety inspection to ensure that it is drivable. If the inspection is carried out successfully, the car is then titled as ‘branded’ which indicates that the car has been salvaged or rebuilt. So any future buyer who wants to purchase such a car can have the entire details about it.

A car that has a salvaged title doesn’t always mean that it has been in an accident. There can be numerous reasons for a car to be titled as salvaged. Some of the reasons why a car is titled salvaged are mentioned below:

If a car has been stolen and misses for a long time, then it is paid off by the insurance company. However, if it is found at a later point in time, the insurance company sells it to a salvager. The salvager will then add any missing parts in the vehicle. Once that is completed, a salvage title is issued for the car.

If in case a vehicle has been vandalised to a lot of damage, there are chances that the car can get a salvage title.

If a car has been damage due to the occurrence of hail, then it can be titled as a salvage vehicle. However, if the state has a certain designation for hail damage, the car will not be given a salvage title.

Advantages of Buying a Salvaged Car

Although the car has been damaged, there are also some advantages to buying a salvage titled car. Some advantages are mentioned below:

Since you are buying a car that is already used and damaged, there are high chances that you can land a great deal with a good car. Although there may be a few damages, if you work out the costs and understand what repairs it may need in the future, purchasing a salvage titled car can actually save you a good amount of money. Besides, if the insurance company wants to get rid of a vehicle quickly, you can land an even better deal.

The Car May Not Be That Damaged

If you’re lucky enough, you can find a car that has the minimal amount of damage that too at a very good price. Not all cars that are titled as salvaged are in the worst conditions. Some may just be titled so because of the incidents that took place with the car. For instance, a car that has been through hail storm can be titled as salvaged. However, hail storm doesn’t really cause a lot of damage.

Should You Consider Buying A Salvage Titled Car?

Buying a salvage titled car may depend on various factors. You should be well aware of the repairs you may have to face once you purchase the car. It is a great option if you’re on a budget. Besides, if you land a great car at a good price, it’ll only be a win-win for you. However, here are three things you should be doing if you purchase a salvage titled car in order to minimise the risks attached to it.

Take A Look At The Repair Estimates

If you want to know till what extent a car was damaged, you can do so easily by taking a look at the total repair estimates of the car. It’ll let you have an insight on the parts that were replaced or damaged and how extensive the accident was.

Buy From A Reputed Repairer

When looking for a car with salvaged title, it is best to check the review of the repairer beforehand. If they have good reviews for the repairs they make, then purchasing your car from them can be a good decision. Many vehicle rebuilding companies like to take shortcuts when repairing totally damaged vehicles due to the cost incurred and skills required.

For example, in 2003, Bobby Ellsworth was involved in tragic accident in San Diego and died on the spot. The police found that the truck that he was riding in had a salvage title. When the truck was inspected to determine the cause of that accident, it turned out that the airbags had been replaced with paper towels.

A study done by Washington Highway Alliance found that one out of 30 previous damaged vehicles are installed with dummy airbags. Lax federal oversight and vehicle inspection regulations make it easy for dishonest salvage vehicle rebuilders to skimp on airbags and other safety devices.

Get The Vehicle Inspected

In addition to running a VIN report, getting the vehicle inspected is one of the most essential things you must do if you’re purchasing a salvage titled car. Bringing a trusted mechanic or taking the vehicle to a body shop can help you understand whether the car is repaired properly or if the damage is to a great extent.

Buying a salvage titled car can also come with hurdles like problems in getting insurance. This happens because no bank or company will readily agree to provide insurance for a car that has already been through damage. Besides, it can be a big trouble for you if you ever want to resell the car because not many people will be ready to buy it. Moreover, determining the value of the car can also be a big hurdle during the time of resale.

Purchasing a salvage titled is solely your decision. There can be various problems if you purchase a highly damaged car if you want to resell it in the future. However, if you’re on a budget, then inspecting and purchasing salvaged title car can work for you.