Research your Honda with our VIN decoder

Enter your Honda's 17-digit VIN above to decode your VIN. We will show your vehicle specification and full vehicle history report, which includes thefts, detailed vehicle records, accidents, titles, and more. This information is compiled by VinFreeCheck.com from multiple sources including but not limited to DMVs, police records, insurance database and made public as a free, informational resource. 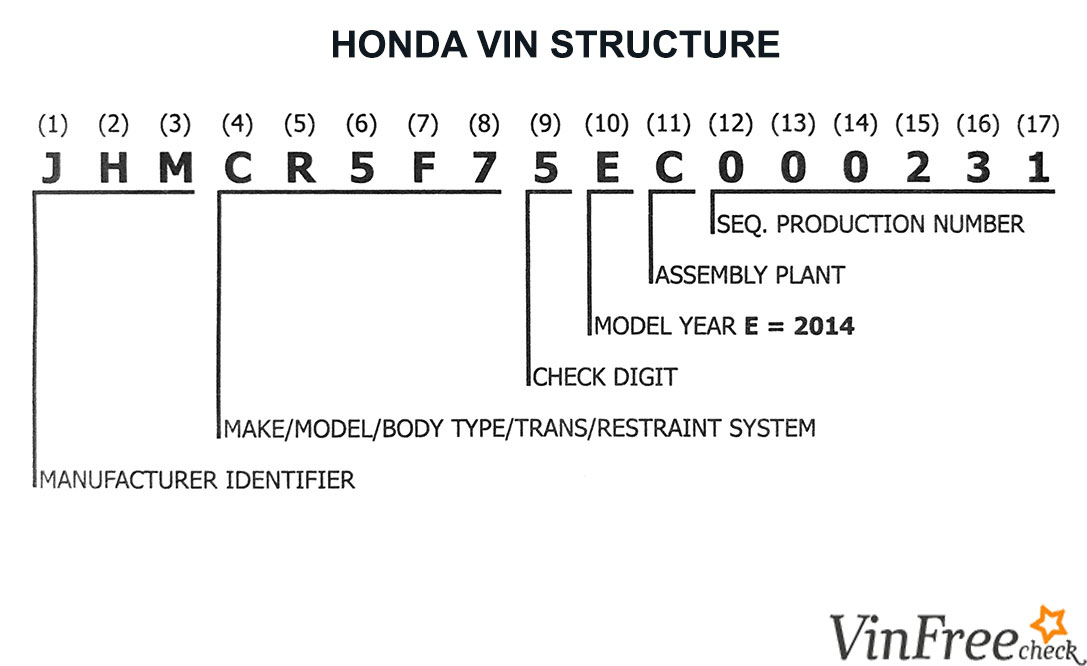 Honda VIN numbers are broken down to 9 sections:

We also have a list of Honda's squish VIN information available in the table below. A squish vin is basically the first 11 characters of the full VIN Number. However, it does not contain the 9th character, which is a check digit to check the validity of a VIN number. With squish VIN, you can manually decode your Honda's VIN with just pen and paper. To learn more check out, What is a VIN Number

From a mechanic to the Father of Honda, Soichiro Honda’s childhood interest in automobiles inspired him to build one of the world’s largest motor vehicle brands. He used to work in an Art Shokai garage where he tuned the cars only to make them race-worthy. In 1937, Honda established a machine company of Eastern sea Precision i.e., Takai Seiki to develop piston rings. After some setbacks, he was able to sign a deal with Toyota. To make this possible Soichiro himself visited a number of factories in Japan only to understand the quality and development process. In 1941, Honda started to produce pistol rings successfully using an automated process that was accepted by Toyota.

From that day and till today, the company has not looked back. In the year 1946, a Technical Research Institute was established by Honda in Japan, where they made small two-cycle engines for motorbikes. The motorbike saw ultra-success and it paved the way for Honda Motor Company. Finally, in 1948, the Honda Motor Company was founded in Japan. Honda opened its first US storefront in Los Angeles in 1959.

The first lineup of the sports car by Honda was S500 and the first automobile was a T360 pickup truck.

With the hope to enter the luxury car market of North America, Honda released Acura in the US in 1986. In the world for engine building and automobile manufacturing, the research institute company of Honda is the sixth-largest. Honda has a presence in various kinds of vehicles out there. Including, motorcycles, trucks, jet, water aircraft, electrical generators, marine engines, mountain bikes, ATV(all-terrain vehicle), robots, scooters, etc.

After 1992, Kawamoto ends the company’s successful participation in F1; it was the most surprising and unexpected change for the company. In 2013, Honda invested about 6.8 billion US dollars of its income in R&D. Hence, it can be said that the history of Honda is very interesting and filled with several achievements.

On 23 Feb 2015, it was announced that by June the CEO and President Takanobu Ito would be replaced by Takahiro Hachigo. And he has been at the helm ever since.