Research your Hyundai with our VIN decoder

Enter your Hyundai's 17-digit VIN above to decode your VIN. We will show your vehicle specification and full vehicle history report, which includes thefts, detailed vehicle records, accidents, titles, and more. This information is compiled by VinFreeCheck.com from multiple sources including but not limited to DMVs, police records, insurance database and made public as a free, informational resource. 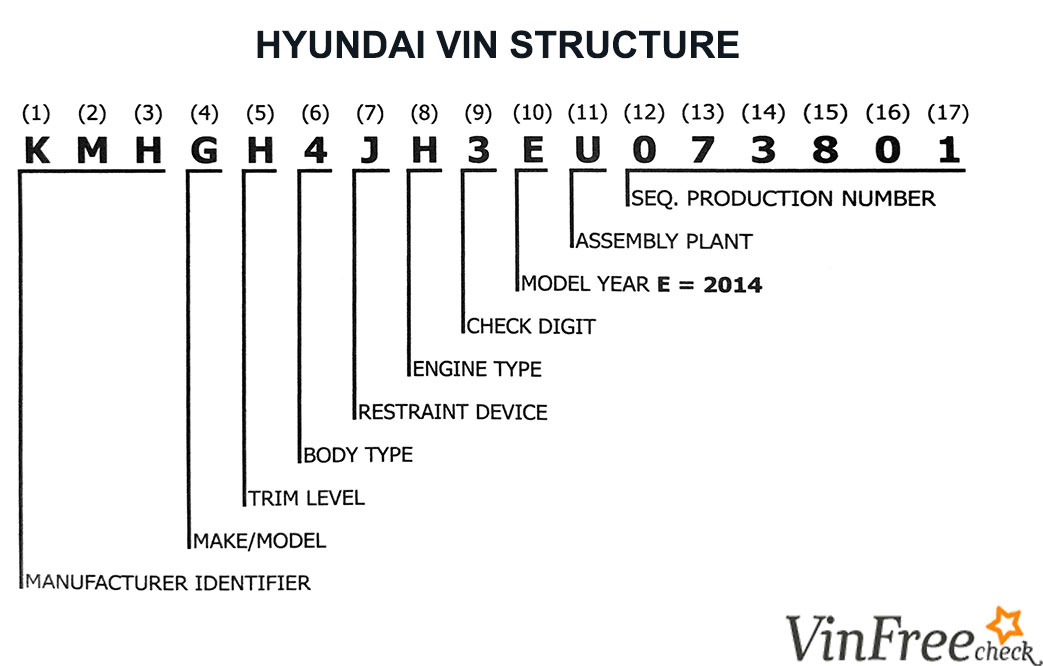 Hyundai VIN numbers are broken down to 9 sections:

We also have a list of Hyundai's squish VIN information available in the table below. A squish vin is basically the first 11 characters of the full VIN Number. However, it does not contain the 9th character, which is a check digit to check the validity of a VIN number. With squish VIN, you can manually decode your Hyundai's VIN with just pen and paper. To learn more check out, What is a VIN Number

Hyundai is the most competitive automobile brand in the market today. Heading back in 1947, Hyundai was founded as an engineering and construction company by Chung Ju - Yung. Ford motors helped Hyundai launch its first model named Cortina. George Turnbull, along with five other best car engineers, built Hyundai's own car named Pony which had an engine made by Mitsubishi Motors in 1975. Pony helped Hyundai to enter the British market in 1982. After three years, Hyundai exported Pony to Canada, which received an overwhelming response. Sales figures were boosted, and it became the top-selling car in no time although Pony was not exported to the United States due to the mismatch with the emission standards.

Hyundai conquered the landmark of producing the one-millionth car in 1985. US people got access to Hyundai cars in the year 1986. During that time, the popular Fortune Magazine listed Hyundai Excel as the best product. Sonata, a midsize vehicle was built in 1988 by the use of Hyundai's own technology. Hyundai's fate took it to new heights when the company production numbers touched the four million mark in 1990. Hyundai became technologically independent in 1991 when it developed its own 4 cylinder gasoline transmission engine Alpha.

Hyundai started its production journey in 1996 in India when a production site was established near Chennai. The year 1999 led to the introduction of Chung Mong Koo , the new company head who was the son of Chung Ju Yung. Further, Hyundai strongly invested in the design, R & D, and other vital aspects of the company along with an appealing marketing campaign. JD Power and Associates company ranked Hyundai second in an initial quality survey in 2004. Hyundai exists among the top hundred brands of the world and is an active sponsorer of the famous FIFA world cup.

In 2006, Chung Mong Koo was arrested in the case of corruption and was charged with misappropriation of one hundred six million US dollars. Later, Kin Dong Jin took charge as the company CEO. Hyundai has overall six R & D centers and has launched various great cars over the years like Veloster, Tucson, Santa Fe, Tiburon, Elantra, and many more. Hyundai Elantra was also bestowed with the North American Car of the Year 2012.
Hyundai motor company has also stepped into developing electric and hybrid motor vehicles. Hyundai Blueon electric car is one of them.