Research your Infiniti with our VIN decoder

Enter your Infiniti's 17-digit VIN above to decode your VIN. We will show your vehicle specification and full vehicle history report, which includes thefts, detailed vehicle records, accidents, titles, and more. This information is compiled by VinFreeCheck.com from multiple sources including but not limited to DMVs, police records, insurance database and made public as a free, informational resource. 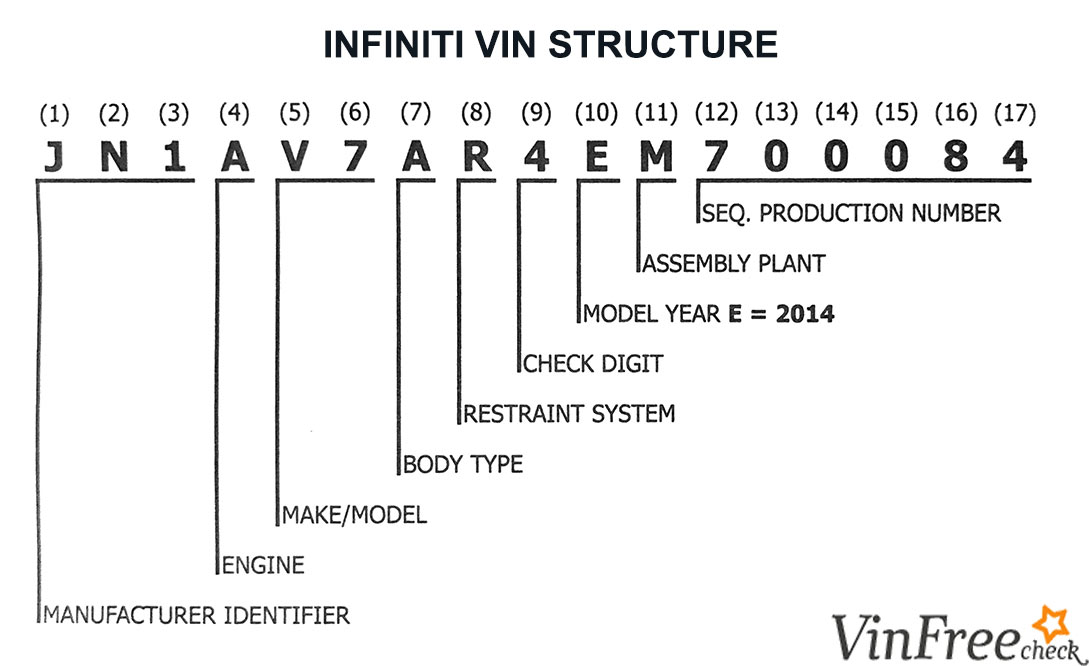 Infiniti VIN numbers are broken down to 9 sections:

We also have a list of Infiniti's squish VIN information available in the table below. A squish vin is basically the first 11 characters of the full VIN Number. However, it does not contain the 9th character, which is a check digit to check the validity of a VIN number. With squish VIN, you can manually decode your Infiniti's VIN with just pen and paper. To learn more check out, What is a VIN Number

When it comes to luxury cars, Nissan's spin-off car division Infiniti stands as one of the top automobile choices. This reputable brand was established in1989. Infiniti emerged with 51 dealerships in the US to compete with Toyota, Honda, and other luxury cars. On the other hand, Infiniti initiated with Q45 Sedan and M30 Coupe models.

Infiniti introduced some impressive car models which included Q45 that had some stunning features including a powerful 278 HP V8 engine with quad wheel steering and active suspension.

Apart from this, it also produced M30 having two doors with a VG30E 162 HP engine. This was a power-packed car with which was produced and sold in thousands. In the years between 1990 and 1992, Infiniti launched two more cars named G20 and J30 but the sales were not up to mark. Against all odds, Infiniti was a master rival against all its competitors in 1995 due to its V6 engine. This engine was ranked as one of Ward's 10 Best Engines for the next 14 years.

Infiniti QX4 was a mid-size premium SUV (first of its kind) to be introduced in the market in the year 1996. Beginning in, 21st Century, Infiniti started introducing world-class features in its cars which included rearview monitors with cameras, voice recognition systems, etc. The year 2003 saw a boost in the sales numbers to Infiniti along with the massive success of their G35 sports sedan. The car was voted as Motor Trend Car of the Year. They continued adding smart features to their cars. For instance, in 2007 they introduced Around View Monitor which allowed drivers to view in all angles of the vehicle. Besides, the Lane departure prevention checked the car from going out of the lane.

Nissan and Renault formed a coalition in 2010 and developed a powerful V9X engine. Infiniti M was also unveiled in the year 2010 along with the Infiniti performance line division. Infiniti also sponsored Renault engines for Red Bull Racing in 2011. Infiniti launched various cars in the next four to five years like Q30, Q50, Q70, QX56, and QX80. They left the Western European market in 2019 due to tough competition.