In North Dakota, all vehicle and license plate registrations are handled by the state's Department of Transportation via its Motor Vehicle Division (MVD). If you're moving in from another state and have a vehicle of your own, you'll need to transfer your out-of-state title and register your vehicle with the state DOT. If you're only working in North Dakota, you'll need to apply for a temporary registration for 6 or 12 months. You'll also need an active car insurance policy from a North Dakota-licensed insurance company.

An interesting note on North Dakota vehicle registration is that annual fees are based on when the vehicle is first registered and its weight (and any additional criteria ascribed by the DOT). Moreover, a 5% excise tax is also charged on "all vehicles purchased either in or outside the state of North Dakota for use in this state."

Vehicle registration is also exempted for military personnel and out-of-state students pursuing their studies in North Dakota. They can continue using their original out-of-state license plates.

Any inquiries on vehicle and title registrations can be directed to the DOT through their official line at 701-328-2725 or via email.

Where Is My North Dakota License Plate Number? 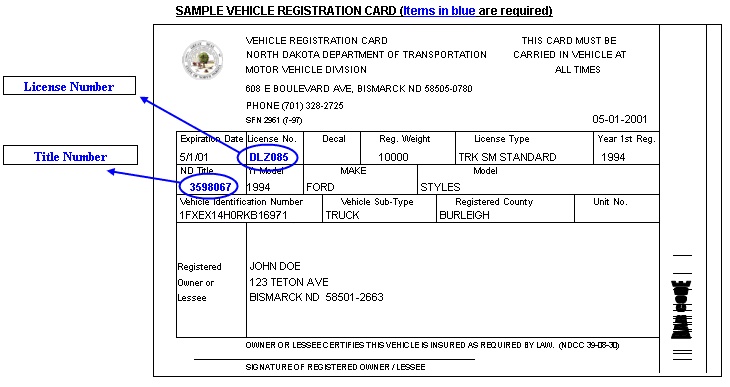 Getting a License Plate in North Dakota

You'll first need to register and title your vehicle before you can get license plates. For non-dealership purchases, all new applications need to be done at the nearest MVD center by appointment. The required items you may need to provide include:

For non-residents moving in to North Dakota, you'll also need to furnish your out-of-state vehicle registration and title (if applicable) in person at an MVD site. Renewals and certain services are available online at the DOT's website.

The standard license plate is the Sunrise plate, chosen in 2015 to replace the older design. License plates follow the format of six alphanumeric characters in the following arrangement: 123 ABC.

When you're planning to buy a used car, a license plate lookup report is going to be your lifesaver. Details you'll find in it include:

Previous owners: Find out the number of previous owners the vehicle has had and how long they've had it in their possession. It doesn't disclose any personal or sensitive information. It does, however, give you a sense of how they used the car before selling it to the subsequent owner(s).

Accident records: Find out if the car was involved in any road accidents. Some cars that were in an accident may not have had extensive maintenance performed to keep it roadworthy. You should always be cautious if you see such records; get an independent check done to look for potential problems.

Junk/salvage title check: This tells you if the car had previously sustained significant damage, and was declared a ‘total loss’ by an insurance company. This record indicates that the total costs to maintain or restore the car are far too expensive owing to the severity of damage it's sustained.

Lien records: Provides information on whether the car has been used in a lease, as collateral for a debt, as a rental car unit, etc. A car dealership (or previous owner) is legally obligated to repay any existing liens before selling the car. If they don't, you may end up becoming liable to repay the remaining amount.

Flood records: Note any damage to the car caused by floods. Floods can cause certain mechanical faults that can be missed without a thorough inspection. In some cases, you might not be informed beforehand by the seller, whether by accident or otherwise.

Why is the Report So Crucial?

While North Dakota in 2020 reported some of the least motor theft cases in the United States, motor theft (and fraud) still happens. You might not think it'll happen to you until it's far too late to stop it. As consumer education is always important to safeguard one's finances, the license plate lookup report is a simple, hassle-free way to protect yourself from potential fraudulent deals.

Dealerships usually issue a free report to potential buyers in hopes of attracting them to make a purchase. This is fine and dandy, but sometimes, unscrupulous parties intentionally alter details of these free reports to deceive buyers like yourself - you might be sold a defective vehicle with a host of maintenance issues that will end up costing you a huge sum over time. You don't want that to happen, don't you?

You can use VinFreeCheck's license plate lookup to access updated information on a vehicle easily. All data is sourced from reputable parties such as the National Insurance Crime Bureau (NICB) and the National Motor Vehicle Title Information System (NMVTIS), to name a few. Just key in the license plate number into the field, and you'll get your report in just a few seconds' time. It's that easy!

So if you're handed a report by a seller, but something about it doesn't add up, get the license plate number and start looking up its information. A simple move like that could help you save tens of thousands of dollars from a scam.

Absolutely. Our services comply with the Driver's Privacy Protection Act (DPPA), in which we don't disclose any personal information about a vehicle's prior owners. Our lookup system performs a reverse lookup that obtains the vehicle's VIN number and searches for its history reports. Nothing in our report is traceable to any particular individuals.

Additionally, the Freedom of Information Act (FOIA) allows any individual the right to access to information collected by the government. There's no reason for you not to give our auto license plate lookup tool a try. It's totally legal and FREE!

We have compiled a list of state specific guides for you. Feel free to check them out.

If you have just purchased a motorcycle, the next thing that you will need to do, is to register it. In order to legally drive a motorcycle on public roads in any state, you need to get your motorcycle registered....

Paperwork for Buying a Car in United States

You will always need to carry out different types of paperwork — whenever you purchase a car — so that you can title your car under your name and drive it legally on the road. So, whenever you are going...