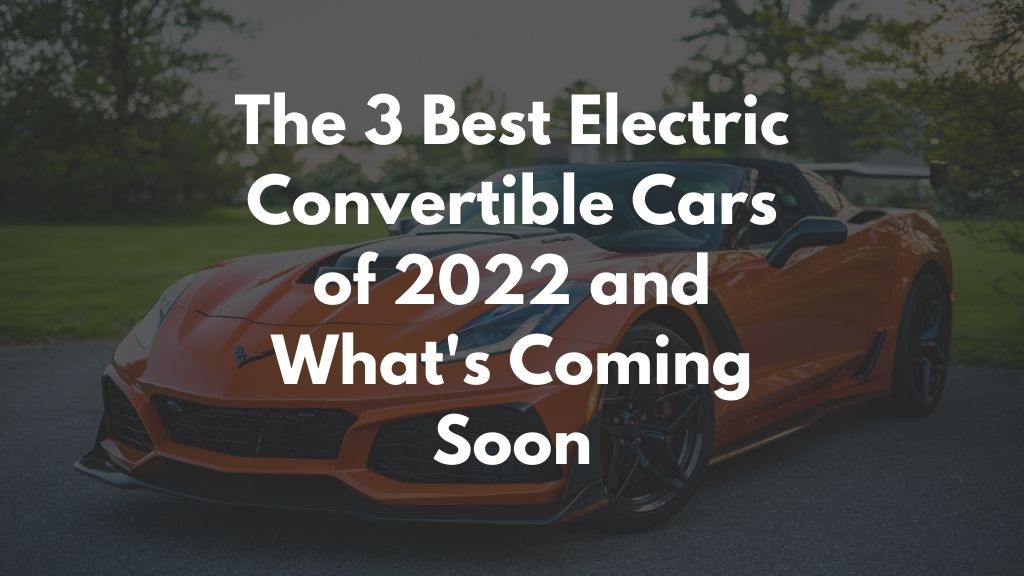 An electric convertible fulfills one of the major fantasies of EV lovers. With EVs dominating the sedan, SUV, and Hypercar divisions, it would seem the Electric Vehicle Convertible is one of the only categories where there are fewer good options for buyers.

Great Convertible EVs are few and far in between, but there are options available if you know where to look. In this post, we’ll be looking at a few of the best electric convertible cars on the market and a few promising future releases.

Electric convertible cars are more difficult to make than regular EVs. The added weight of the roof-folding mechanism paired with the powerpack, motor engine, and cabin means they’ll have a poorer range than their counterparts. For that reason alone, most modern EV manufacturers avoid them as the risk is too great in an emerging market. This fact as well as many others shaped our list as well as the criteria we had for each entry.

Range is King in EVs. More than any other feature, buyers look for range in their EVs. It translates to less time at the charging station, more distance traveled, as well as more travel flexibility. For a weighty EV category like convertibles, range becomes doubly important.

EVs are famous for their whip-tide acceleration and jaw-dropping technology features which include but are not limited to, fast charging, inductive charging, and precision handling. These features remain very attractive even in Electric Convertible cars.

As we mentioned, most EV manufacturers don’t make Convertibles. Engineering them is a challenge within itself, and a drop-top roof might not be enough to sell a car. That said, we still included the few electric convertibles currently available, and the few concept cars that might become available eventually.

The Tesla Roadster is the first and most famous EV convertible ever to have graced the asphalt. Reserved for the discerning few, the first car in the line was unveiled in 2008 at a private event hosted by Tesla’s CEO, Elon Musk. The first few units of the car were reserved for investors, and it rocked the chassis of the world-famous Lotus Elise. It ran on Tesla’s first engine, a 3-phase, 4-pole induction electric motor, capable of 288 hp, and capable of accelerating from 0 to 90 in 3.9 seconds.

The EV catapulted Tesla into the limelight and formed the foundation that many of their cars since were built on. The second version of the electric convertible was announced at the Tesla Event in 2017, and if the specifications on the website are anything to go by, it might be the fastest Electric convertible car ever built. When it rolls off the line, it should do 1-60 mph in 1.9s, reach a +250mph max speed, and 620 miles of range. It has been confirmed that the Tesla Roadster has a glass removable roof instead of the standard cloth roof, and it has the most aerodynamic frame Tesla has designed to date.

Trade your sports and luxury cars for something more affordable. The Fiat 500 Electric is a four-door Electric Hatchback with an optional convertible flap that transforms it into a convertible EV. It runs on a modest Permanent magnet AC synchronous motor which outputs 220 Nm or 162 lb. ft. It has a 199-mile range and a total battery capacity of 42 KWh.

If you don’t mind paying another $2000 or so for the unconventional flap that can withstand high speeds and like hatchbacks, then you’ll love the Fiat 500 EV. It retails for well under $30,000 and might be one of the few Electric Convertible cars in your budget range.

The Smart EQ is a hidden gem of a Convertible Electric car. Designed for city commutes, the Fortwo Cabrio is a Mercedes-funded, smart Electric Vehicle that runs on a conservative but powerful 80 bhp motor with a 17.2kWh battery. Together, the system nets you 82 miles of range and a maximum speed of 81 mph.

Charging is a non-issue with the battery. Although it’s limited to a 22kW onboard charger, you won’t have to wait for long at the charging station or at home.

The Smart Fortwo Cabrio appeals to the thrill-seeking EV lover with its boxy design, sharp angles, and 12-second retractable top. You’ll miss out on nothing with the Fortwo basic design. It has a standard infotainment system, several levels of interior trims, and supports Apple Carplay and Android Play.

Electric Convertible Cars to be Released

The Mercedes-Maybach luxury brand takes a generational leap forward with the Maybach-Cabriolet Concept. Future owners will be enchanted by everything from its refreshed luxury boat-inspired chassis to the snappy EV motors, range, and speed.

It is powered by four electric motors that connect to an All-wheel-drive system that delivers 750 horsepower and accelerates from 0-60 in 4.5 seconds flat. It has a 200-mile range and a quick charge feature that nets you 60 miles of range for a five-minute charge.

The 360-degree interior lounge fitted with crystal-white leather is easily the highlight of the concept car. The inlaid aluminum, two heads-up displays, a voice-activated concierge, and biometric sensors elevate the Cabriolet past above any known convertible experience.

Unlike the other cars on this list, there isn’t a ready spec sheet for the Bentley EXP 12 6e. However, the information available paints the car as a range king. According to Bentley’s official website, it should be able to travel between London to Paris using battery power, fast charging technology, and inductive technology. The engine, speed, transmission, and everything else remain a mystery, but with Bentley’s track record, it’s sure to be on par with the range.

Finding the Best Convertible Electric Vehicle for You

Buying your dream Convertible EV is not as simple as visiting your local dealership. The 1st generation Tesla Roadster, the Smart Fortwo Cabrio, and the Fiat 500 Electric will likely not be available in your area. You’re better off browsing an online marketplace. As for concept cars, you’ll have to wait for their launch like the rest of the world and hope to snag one at launch.